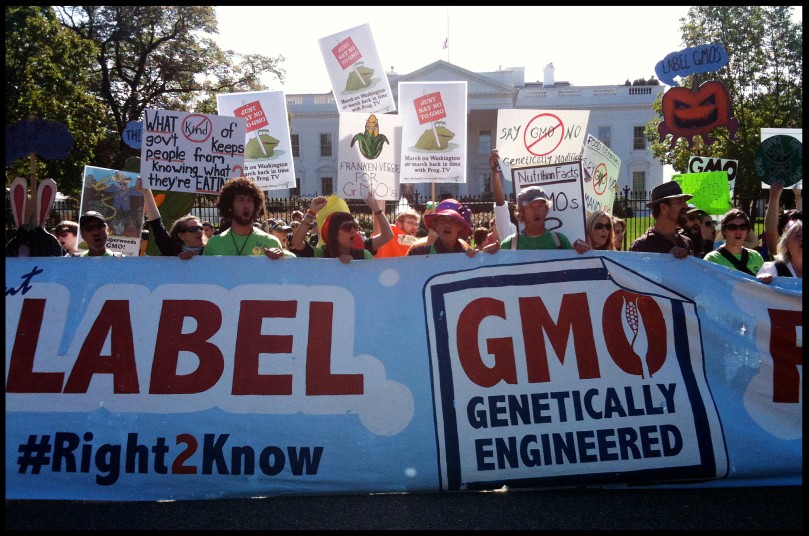 Are you consuming Frankenfoods? Do You Even Know?

ORIGIN: 1990’s- from Franken(stein) + food. Genetic engineering (GE),or genetic modification (GM) food involves the laboratory process of artificially inserting genes into the DNA of food crops or animals. The result is called a genetically engineered or genetically modified organism (GMO). Many opponents of GE crops refer to them as Frankenstein foods, of Frankenfoods.

Genetically modified foods can be engineered with genes from bacteria, viruses, insects, animals, or even humans. Most Americans say they would not eat GE food if labeled, but unlike more than over sixty other nations around the world, the U.S.A. does not require the labeling of GE foods. For the non-GMO consuming population, it can be difficult and a daunting task to stay up-to-date on at risk food ingredients. Especially due to the ever-growing list of at-risk agricultural ingredients frequently changing in America.

Americans pride themselves on having choices and making informed decisions, and under current FDA regulations—consumers in the U.S. are left without a choice when it comes to GE ingredients listing. Over fifteen European Union nations, including —Australia, China, Russia, New Zealand, and many other countries, genetically engineered foods are required to be labeled. Labeling in American is not happening and busy-aware consumers are turing to organizations such as, The GMO Project— for safe food information.

10 Things You Can Do if You’re Concerned About the Lack of Labeling on Genetically Engineered Foods.

Look for “Non-GMO” labels. Some companies may voluntarily label products as “Non-GMO.” Some labels state “Non-GMO” while others spell out “Made Without Genetically Modified Ingredients.” Some products limit their claim to only one particular, at risk ingredients such as soy lecithin, listing it as “Non-GMO.”

The following is according to the Non-GMO Project. Agricultural products are segmented into two groups: (1) those that are high-risk of being GMO because they are currently in commercial production, and (2) those that have a monitored risk because suspected or known incidents of contamination have occurred—or, the crops have genetically modified relatives in commercial production with which cross-pollination (and consequently contamination) is possible.

Here is a list of “High-Risk Crops” listed by the Non-GMO Project.  In 2016, these crops are listed as in  current commercial production, as well as the ingredients that are derived from these crops. Below is a list verified as of December 2011:

These crops are suspected or have been found in known incidents of contamination . These crops have a genetically modified relative in commercial production with which cross-pollination is possible. The GMO Project test these crops as needed to assess risk and move them to the “high-risk” category if they see significant risk of GMO contamination.

Tomatoes: In 1994, genetically modified Flavr Savr tomatoes became the first commercially produced GMOs. They were brought out of production just a few years later, in 1997, due to problems with flavor and ability to hold up in shipping. There are no genetically engineered tomatoes in commercial production, and tomatoes are considered “low-risk” by the Non-GMO Project Standard.

Potatoes: The Simplot White Russet™ potato recently acquired USDA and FDA approval and went into commercial production. In August 2015, the Non-GMO Project added the potato to our Monitored Crop list. As a genetically modified organism, the Simplot potato is not allowed in any form in a Non-GMO Project Verified product. Genetically modified NewLeaf potatoes were introduced by Monsanto in 1996. Due to consumer rejection by several fast-food chains and chip makers, the product was never successful and was discontinued in the spring of 2001.

Pigs- Livestock: A genetically engineered variety of pig, called, Enviropig was developed by scientists in 1995 and government approval beginning in 2009. In 2012 the University announced an end to the Enviropig program, and the pigs themselves were euthanized in June 2012.

Salmon: On November 19th, 2015 the Food and Drug Administration made US history—for the first time ever a genetically modified animal has been approved for human consumption. The FDA effectively ended a long struggle for AquaBounty Technologies who had been seeking approval for its AquAdvantage salmon since the 1990s. The AquAdvantage salmon is genetically engineered to reach market size twice as fast as conventional, farmed Atlantic salmon. Not only does this new salmon contain a growth hormone from Chinook salmon, but it also contains a gene from a completely different species—the ocean pout—which allows the new growth hormone to remain active year round.

Go hug your local farmer and rancher, aqua or soil— and get to know them,they are happy to sell to you. Shop local, and eat fresh, low-processed, organic foods whenever possible, and stay up to date on the fight for the right to eat clean food and water!