Rainy weather has a beautiful side too, rainbows.

The colorful arc spanning the sky is an optical illusion but could be the inspiration for a cooking project. And, it could be a nice lesson.

Rainbows are an optical and meteorological phenomenon. A spectrum of light appears in the sky when the sun shines on droplets of moisture, like rain, in the atmosphere. It’s a simple system: Rain and sunshine make pretty colors which always appear directly opposite of the sun.

Although there are many types of rainbows, the one seen most often has red on the upper part and violet on the inner portion. When a double rainbow occurs – a second arc seen above and outside the first arc – the colors are reversed. Dark skies as a backdrop create the most luminous rainbows. 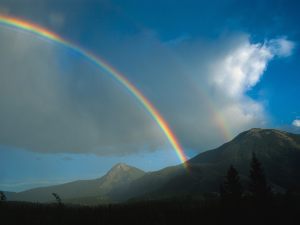 Rainbows can also be seen near waterfalls and fountains. Sometimes, rainbows can be seen on sunny days when there just happens to be lots of water droplets in the sky.

Or, an easier option is making the rainbow at home! You can make this as cookies. Or, for a cake, assemble it until the point where you’re about to frost it. Then, cut in half, put one half on top of the other and then frost.