Drawing and cooking often have the same goal—creating something colorful!

Colorful will also mean a variety of tasty fruits, veggies and meats brought together. Kabobs are a great way to not only experiment with making different color combinations, but also a way to allow your little ones the independence to make their own creations!

Despite the unseasonably chilly weather, it is summer. And grilling is a wonderful way to cook these delicious treats. 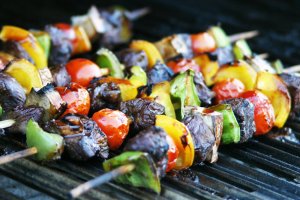 The key to a good kabob is a variety of colorful options to put on the sticks. Remember, wash all veggies before starting to chop. Start with about 2 pounds of meat; that can be fish, shrimp, pork, chicken or beef. The sky is the limit! Do remember to be extra careful when working with raw chicken to clean all the areas you touch with the raw chicken after.

Veggies will offer the most color options. Chop a large green bell pepper, large red pepper and corn on the cob into 1 ½ inch pieces. If you want zucchini, cut it into 1 inch pieces. A red onion should be quartered. There could be mushrooms and cherry tomatoes. I like adding fruit like pineapple.

Lightly brush the meat with olive oil and season. You could use a prepared rub for the meat. Or, minced garlic with olive oil, salt and pepper is always a good alternative to add a little extra something to any meat.

Then start the fun! Traditionally, meat and veggies should be alternated on a skewer. But let your little one experiment. Maybe make a challenge out of creating color combinations. While making these rainbow-inspired food kaleidoscope talk with your kids about how kabobs have changed over the years.

Kabobs, originally kebabs, are of Persian origin. Arabic tradition traces the dish was invented by medieval Iranic soldiers who used their swords to grill meat over open-field fires. But others claim the dish has Mediterranean ancient ties. An early version of the kabob was mentioned in ancient Greece as early as 8th Century BCE. In India, there are records that kabobs were served in royal houses. During some periods, kabobs were enjoyed by commoners in India for breakfast with naan, a traditional style of bread served in India.

You can enjoy right away or try adding a little sauce. For me, a little bit of barbecue sauce lightly brushed on the kabob adds a nice touch. Maybe add it to some and not others and try both. Which do you prefer?